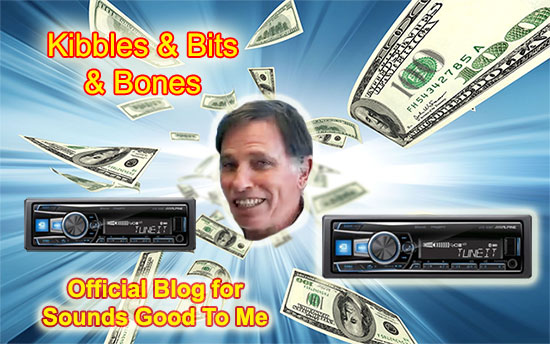 Hello there…  My name is Mark Kelber and I am the store manager of Sounds Good to Me here in Tempe, AZ.  For reasons unbeknown to me way back around 1985  Dave Gracey who now is the store owner, gave me the nickname “Muggsy” maybe because I look like a dog or something but it stuck and now pretty much everyone calls me Mugs.  I don’t mind and now when we needed a name for my car audio blog I decided to call it “Kibbles & Bits” by Muggs.

Dave and I both worked as salesman and store managers in what was than a 5 store chain in the valley called “21st Century Sound”.  It was about that time when car audio really started to take off and we worked our tails off making people happy.  And that’s really what car audio is all about…making someone happy.  Time was back in the day before cell phones, pagers, and iPods that the car was the one place you could really escape and crank up the radio and forget about your problems for that time alone in your car.

Back then cassettes were “The” thing and a new company started making car cassette players called Alpine.  Maybe you have heard of them? Well Dave and I cut our teeth on selling Alpine auto-reverse am/fm decks.  Now just down the road from us another small company, here in Tempe, was starting to get into the car audio business but instead of players they built amplifiers and woofers, maybe you have heard of them too…  Rockford Fosgate?  They had a line of amplifiers called “The Punch” and they had these big speakers called woofers that would allow you to not only hear your music but feel your music too!! What a hoot! People had no idea a car could sound so good.  And with cassette tapes too… Not like CD’s but scratchy, hissy cassette tapes.  Hey; what the hell did we know?

All we knew was it sounded kick ass. As time went on the equipment became more and more sophisticated and specialized for the automobile environment and Dave and I began to really “know” not just some cars, but damn near every car and truck being driven.  We tore into anything that rolled in with a battery, we were fearless. We also fabricated some mighty loud “river” systems that tubed down the Salt, still do today too.

So why do I start my blog telling you all this??  Because we feel that even in today’s high tech, iPod driven environment where the cars are more computer than car and installing even something as simple as an auxiliary jack for an iPod can be what seems like an expensive and risky proposition in a number of newer vehicles the bottom line is that it should still bring a smile to your face and some happiness in your heart.

We provide happiness through audio. That’s what we do.  We take inordinate pride in the products we choose to sell and even more in the way we go about installing them.  We realize the huge challenge that the new vehicles present in adding any after-market product.

Sounds Good to Me, located in Tempe, AZ has a number of resources available which can allow us to upgrade and vastly improve your driving experience.  All our installers are certified and have been with us a minimum of 3 years.  We take great pride in the quality of our installations and feel that any product is only as good as the way it is installed.  In the coming weeks I am going to take the opportunity to blog about car audio both in general and also in detail but the way I see it not the way they say it is.